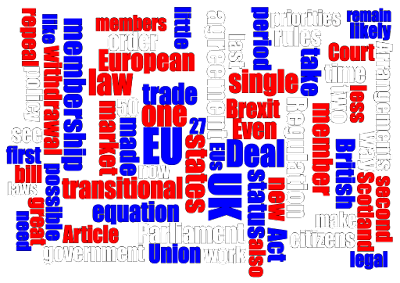 The past weeks the blog series TERRITORIAL DISPUTES introduced the case of Northern Ireland. In doing that, the first posts presented some of the most controversial issues that were the pillars of the Brexit campaign.
So far, the posts covered European Union citizenship, free movement of persons, provision of services, workers, benefits, and family members. Today, the post includes another freedom: free movement of goods. This is of particular importance for the United Kingdom (and therefore, Northern Ireland).

Art 26(2) TFEU defines  the internal (common/single) market as an area without frontiers in which there is free movement of goods, persons, services and capital.
Free movement of goods is central to the operation of a common market because it aims to ensure that imported goods are not placed at disadvantage by imposition of extra costs.
For example, a French exporter of wine into the United Kingdom would not fear any unfair disadvantage in relation to British wine producers (and vice-versa) as long as the United Kingdom remains part of the European Union.

Some basic yet crucial questions

What is a free trade area? What is a customs union? What is an internal (or single) market?

Free Trade Area (FTA):
it means a removal of customs duties, border taxes between states, quotas or limitations on what can be imported but each state keeps own duties towards countries outside the FTA.
Customs union:
FTA in addition to a common level of duty on goods coming from outside the FTA. This implies a removal of internal customs or quotas in addition to the erection of uniform external tariff.
Single/internal market:
it means customs union in addition to free movement of factors of production. The terms “single market” or “internal market” replaced common market in 1986 (SEA).

What about goods coming from third countries outside the European Union?

European Union tariff is charged on all goods coming into the European Union from third countries. It is the same tariff regardless of where the goods enter. The monies raised are part of the EU budget.
The Common Custom Tariff (CCT) is different from charges levied by a member state as part of their own internal taxation system.  The CCT rates are fixed by the EU Council on a proposal from the EU Commission.

What is meant by goods in free circulation?

What does the term “goods” mean within European Union law?

The term “goods” is used interchangeably with the term “products.”  The European Court of Justice defines it as follows:
Commission v Italy (The Art Treasure Case) (7/68): products which can be (1) valued in money and which (2) are capable of forming the subject of a commercial transaction.

Tomorrow, the post will introduce financial (pecuniary) and non-financial (non-pecuniary) barriers prohibited by European Union law in relation to free movements of goods.