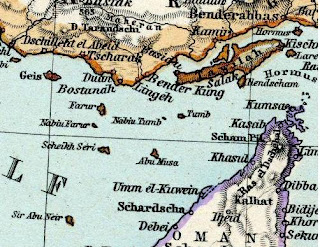 The Persian Gulf: Iran, UAE and the “Three Islands”
Yesterday, the post introduced Iran in the context of the Persian Gulf and TERRITORIAL DISPUTES. Today, the blog series introduce the difference in relation to “three islands.”

The islands – with Abu Musa and Lesser Tunb located 38 and 22 nautical miles from the Iranian coast respectively and, by way of comparison, both are nearly 32 nautical miles from Ras Al-Khaimah – have been forcibly occupied by Iran since 1971.
Publicly, neither party to the dispute shows the slightest willingness to compromise on the sovereignty issue. The islands themselves, apart from some oil deposits (both on land and in their territorial waters) and deposits of red oxide, have little value in terms of resources. All three of them are small, and Lesser Tunb is tiny, uninhabited and without potable water. Even Abu Musa, the most well-endowed of the three, has an area of no more than four square miles, a population of around 2,000 people in 2012, three small oil wells and diminishing deposits of red oxide.

The dispute seems to be in part the manifestation of much deeper regional rivalries: the islands are psychologically important to both Arabs and Iranians vying for regional influence and respect. They are powerful symbols of nationalism, status, prestige and regional authority.

Beyond the historic contestation and symbolism of the islands, their significance is strategic, as they lie close to the Strait of Hormuz through which passes 35 per cent of the world’s seaborne oil and thousands of tons of commercial shipping on a daily basis.

Bases for the Claims
Iran bases its claim to the islands on a chain of ownership through various ancient Persian empires dating back to the sixth century BCE. The political and commercial domination of Iran over the Persian Gulf in the Seleucial (312- 150 BC), Parthian (238 BC-224 AD), and Sassanid (224-641 AD) period points to the conclusion that in pre-Islamic times the [Tunbs] and Abu Musa most likely belonged to Iran. Arguably, despite its claim of dominating the Gulf continuously for over two thousand years, Iran has not yet come forward with any records of its own that display or document an earlier connection with the islands.

Scholars who support the UAE’s claim to the islands disagree with the idea that Persian empires continuously ruled the Persian Gulf, especially after the rise of Islam. the Gulf became a purely Arab "lake" with the Islamic conquests in the seventh century AD. Even in the periods following the decline of the early Islamic Caliphate, local powers, especially in Oman, maintained control and sovereignty over the region as a whole.

The historical records show that the Arab Qawasim tribes of Ras Al-Khaimah, Sharjah and Lingeh made use of the islands from the eighteenth century onwards. The British, as the dominant power in the region, supported the Qawasim claims to the islands largely because they were anxious to contain and limit the infuence of Persia in the Gulf. British support of the Qawasim tribes was later translated into their support of the emirate of Sharjah’s claims to Abu Musa, and the Ras Al-Khaimah emirate’s claims to the Tunbs. When these emirates were united into the UAE, the new state inherited these claims, all of which are contested by Iran.

Unfortunately, there is a problem with both the Iranian and Arab versions of history: there is no surviving documentation from pre-colonial times about sovereignty over these three particular islands.

The Three Islands
Link to the complete document

Iran. A Country Study
Link to the complete document

Disputes Islands Between UAE and Iran
Link to the complete document