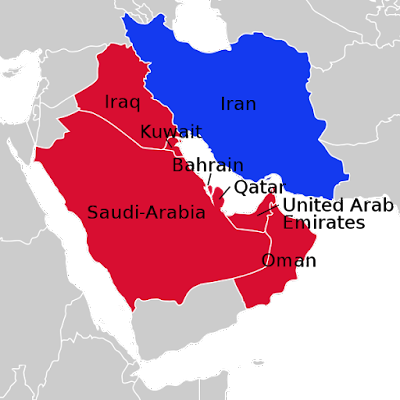 The Persian Gulf and the Role of Outside Powers

TERRITORIAL DISPUTES such as the ones in the Persian Gulf have to do with domestic and international elements. As Huth says “states leaders are both national security managers as well as domestic politicians seeking to maintain their position of influence and power. As such, the foreign policy goals of state leaders should reflect the pursuit of both external security as well as domestic political gain.”
Huth, Paul K. 2001. Standing Your Ground. Territorial Disputes and International Conflict. The University of Michigan Press.

After the collapse of the Soviet Union and America’s stunning success in the Gulf War, the United States stood virtually unopposed in the Persian Gulf region.
Over the coming decade, however, the United States is likely to find itself on a more crowded playing field as several outside powers, notably European countries, Russia, and China, compete for enhanced influence and access.

These countries, driven by geopolitical, economic, and strategic motivations, will pursue their own agendas, objectives, and priorities that will often clash as well as converge with U.S. policies and interests. Their support or opposition will be an important determinant of U.S. success in implementing its policy initiatives.

Central to the UK government’s new strategy is the establishment of a network of facilities and partnerships designed to secure a permanent British military presence in the Gulf. New and enlarged bases in countries such as Dubai, Oman and Bahrain will enable the UK to present a more assertive position in the region, and to safeguard the all- important outward ow of gas and oil.
At the same time, British arms companies continue to sell vast amounts of weaponry to support the Gulf states’ own military expansion. Since 2010, the UK government has approved over 6,000 individual export licences to arms companies serving the region, with a combined value of £16 billion.

In the broader universe of Moscow’s foreign policy, the Middle East generally ranks after the United States, Europe, and China and Asia. The Kremlin again sees Russia as a great power on a global scale, and as such it cannot ignore a region so close geographically, so rich in hydrocarbons, and so unstable socially and politically as the Middle East.
Moscow’s withdrawal from the Middle East under then president Mikhail Gorbachev at the start of the rst Gulf War marked the decline of the Soviet Union’s superpower status. Russia’s reappearance as a player in the Middle East under President Vladimir Putin has the aim of restoring the country’s position as a great power outside of the former USSR.
With the start of the military intervention in Syria in 2015, and the U.S.-Russian diplomatic e ort that accompanied it, the Middle East has become a key testing ground for Russia’s attempt to return to the global stage.

China’s rise is shaping up to be the most salient development of international politics and economics in the early 21st century, and Beijing is increasingly searching for stable sources of energy to power its ballooning economy. This has meant that China’s relations with resource-rich Persian Gulf states have become more intensive even as Beijing has become more pragmatic in its approach to the region.
Whereas once China viewed events in the Gulf region through the lens of its own revolutionary ideology, its relations with Middle Eastern nations are now driven more by energy concerns. Chinese state-owned oil companies are now aggressively bidding for contracts in the Gulf, and there is a clear Chinese presence in regional commerce.

The posts this week will center the attention on the role these external powers (mainly, the United States, the United Kingdom, Russia and China) have in the Persian Gulf.

Russia and the Persian Gulf
Link to the complete document

China and the Perrsian Gulf
Link to the complete document