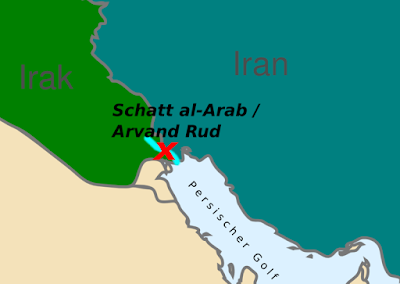 Conflict History
The delimitation of the Shatt al-Arab River has been a point of contention between the co-riparians for centuries. Tensions due to incompatible sovereignty claims over the river escalated in the 1960s and led to a full-scale war between Iran and Iraq from 1980 to 1988. Recently, after centuries of dispute, bilateral strains have been normalised and the co-riparians have concluded an agreement on both the delimitation and the joint management of the Shatt al-Arab River.

In addition to that, this river also symbolises a cultural line between Persians and Arabs. This boundary illustrates the many fault lines between Iran and Iraq: Shi’a vs. Sunni Government; heir of Persian Empire vs. heir of Ottoman Empire; Fundamentalist/Secular Government.

The delimitation of the Shatt al-Arab River’s borders has been a point of contention between Ottomans and Persians for centuries and both empires have sought to control it. After the Second World War, and the dissolution of the Ottoman Empire, the dispute shifted to an Iraq-Iran conflict.

Not only Iran – Iraq: The United Kingdom
The British government was involved in the issue ever since 1847, when the treaty of Erzerum of May 31, 1847 was negotiated and signed between representatives of Iran and Ottoman Empire as the main parties as well as the representatives of Russia and Great Britain.

Later, during demarcation of frontiers of these two countries, which was dragged on until 1913-14, the British played a crucial role. The dispute over the Waterway flowing between Iran and Iraq called "Shatt - al - Arab", was an issue involving Iran - Iraqi relations. After the First World War as a successor state, but as until 1932 the British government had a mandate over Iraq, it was the Anglo - Iranian diplomacy which served instead.

During the negotiations between Iran and Ottoman Empire in 1845-47, British and Russian representatives, as two rival powers pursuing their own interests, participated in the negotiations, and as a party to the dispute tried to influence the outcome, that i s to say, the British supported the Ottoman’s arguments and the Russian supported the Iranian side. Later on, by submitting a partial comment on the treaty provisions in favour of the Ottoman Empire, the treaty itself became a source of dispute between the two parties.

Iraq-Iran: from Water Dispute to War
Link to the complete document