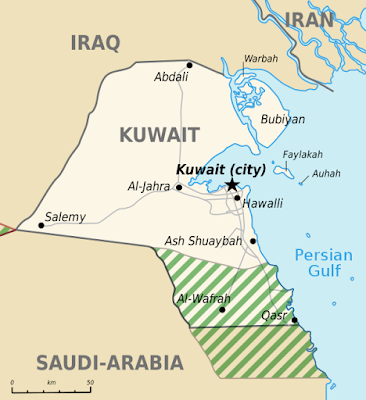 A territory of 2,200 square miles (5,700 square km) along the gulf was shared by Kuwait and Saudi Arabia as a neutral zone until a political boundary was agreed on in 1969. Each of the two countries now administers half of the territory (called the Neutral, or Partitioned, Zone), but they continue to share equally the revenues from oil production in the entire area. Although the boundary with Saudi Arabia is defined, the border with Iraq remains in dispute.

Historical Background
In the northern part of the country, Saudi Arabia contested territory with Jordan, Iraq, and Kuwait and these border disputes were not resolved until 1965, 1981, and 2000 respectively. In 1922, even before the creation of the new state, Ibn Saud, the leader of the territory of Najd (the bulk of what makes up Saudi Arabia today), issued a claim against the British along the borders of what is now Iraq, Kuwait, and Jordan after the British took over territory in that area formerly controlled by the Ottoman Empire.

As with the zone between Iraq and Najd, the Kuwait-Najd zone was also about 2,500 square miles of desert. It was decided that “until through the good offices of the government of Great Britain a further agreement is made between Najd and Kuwait,” both states would have equal access to the neutral zone, including any future resources found there, particularly oil. After oil was discovered in the neutral zone in 1938, both states granted concessions to foreign oil companies, but it was not until the late 1950s that Saudi Arabia and Kuwait started bilateral negotiations on sovereignty rights to the zone, as well as maritime rights in the offshore area (about 40 miles).
In late 1960, the two states came to an agreement to equally divide the neutral zone and a committee of boundary experts pursued delimitation for a number of years. In July 1965 Saudi Arabia and Kuwait signed a Partition Agreement in which the neutral zone was equally divided, extending out to six miles of each annexed section with regard to maritime rights. Demarcation formally occurred in December 1968, with the land boundary dispute resolved, but the maritime dispute unresolved.
The maritime boundary dispute not only included water rights, but also sovereignty over two islands, Qaru and umm al-Maradim, located respectively about 23 and 16 miles away from the former neutral zone. Neither state took any actions with regard to their maritime boundary or rights to the islands until in January 2000 when Iran began to drill in an offshore gas feld that was claimed by both Saudi Arabia and Kuwait.
This mutual threat motivated Saudi Arabia and Kuwait to sign an agreement in July 2000 to delimit their maritime boundaries, giving Kuwait sovereignty of the two disputed islands, with natural gas reserves in the area to be shared equally by the two states.

The Onshore Operations covers an area of approximately 5000 square kilometers located in the Partitioned Zone between State of Kuwait and Kingdom of Saudi Arabia. The natural resources contained therein are equally shared by both countries. The area is currently operated jointly by Kuwait Gulf Oil Company (KGOC, representing State of Kuwait) and Saudi Arabian Chevron (SAC, representing Kingdom of Saudi Arabia).
The operations are managed by Wafra Joint Operations (WJO). WJO assets are staffed and funded equally by KGOC and SAC to explore, develop and produce oil and gas out of several fields and reservoirs in the area. The first discovery in this area was made in 1954 by drilling and completing the first well in the Wafra Field. Six major fields have been discovered in the area to date; Wafra, South Fuwaris, South Umm-Gudair, Humma, Arq and North Wafra.

The offshore Operations covers an area of approximately 7000 square kilometers is in the Partitioned Zone between State of Kuwait and Kingdom of Saudi Arabia. The natural resources contained therein are equally shared by both countries. The area is currently operated jointly by Kuwait Gulf Oil Company (KGOC representing State of Kuwait) and Aramco Gulf Oil Company, (AGOC, "representing Kingdom of Saudi Arabia).
The operations are managed by Khafji Joint Operations (KJO). KJO assets are staffed and funded equally by KGOC and AGOC to explore, develop and produce oil and gas out of several fields and reservoirs in the area.
The well was drilled in 1960 by AOC (Arabian Oil Company), known as K-001 (Khafji Field Well #1) in the Khafji Field. Four major fields have been discovered in the area to date; Khafji, Hout, Dorra and Lulu.

Resolution of Border Disputes in the Arabian/Persian Peninsula

The Partition Zone
Link to the complete document