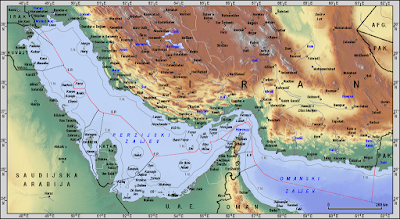 Borders and the Persian Gulf

Often borders are matter of controversy. The Persian Gulf is not an exception. In this particular case, there are borders in land and water (for example, the exclusive economic zone often creates tension between many of the claiming parties). For instance, who has the right to explore that exclusive sea-zone? What happens in the zone in which to or more claiming parties overlap?

The concept of territorial boundaries for the states of the Gulf Coop- eration Council (also referred to in this paper as the Gulf states) is a relatively new phenomenon. Until recently, a principal difficulty in conceiving of territorial boundaries, let alone defining them, was the alien nature of boundaries them- selves, the lack of any need for them, and the absence of putative states in most of the Peninsula.

It was not until well into the twentieth century—and in some cases late in the century—that the nature and the form of today's seven states became clear. In large part, the dynamics between present states derives from the jostling that took place as the states began to differentiate themselves.

The Persian Gulf Boundaries
The Persian Gulf with an area of approximately 90,000 square miles is underlain in its entirety by continental shelf. The Gulf is virtually an enclosed sea with the only opening being in the east through the Strait of Hormuz.

There are several boundaries (in land and water) created by different methods:

Negotiated Boundaries
The methods employed by these countries to delimit their offshore boundaries vary. The equidistance method has been used but not without modification due to special circumstances. In certain circumstances islands have been given special consideration. In some areas they have been completely disregarded, in some situations they have been given partial effect in the delimitation process. Outstanding sovereignty disputes will complicate many of the remaining boundary negotiations.

Sovereignty and Boundaries in the Gulf
Link to the complete document