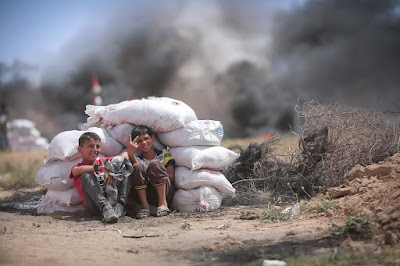 The egalitarian shared sovereignty applied to territory in relation to the Israel-Palestine difference (cont.)
It is arguably a truism in international law and politics that an ultimate sovereign, with a common legal bond or system of norms, will govern one territory with population.

The EGALITARIAN SHARED SOVEREIGNTY may rule out extreme situations such as:

United Nations (UN): although UN aims to grant sovereign equality among the States its own system reveals a contradiction: veto power in the Security Council is only granted to certain sovereign States.
This may be translated (in the perception of at least one of claiming parties, either Israel or Palestine) as an unbalanced and unfair starting point to have negotiations, and with a predictable result.

Not only does the Security Council present these problems but also other UN organizations. Even the UN General Assembly, at first glance a fair environment for sovereign States to participate in, has been regarded as ineffective or irredeemably biased because of the different bargaining powers of its members.
Finally, in cases of contested sovereignty over populated territories, stateless people are not UN members.

Other parties: in terms of other parties alien to the dispute (for example, the United States, the United Kingdom, Russia, the Arab League) history is self-evident in demonstrating their policies in the region have been far from successful, have taken little care about the local population and their needs, and have been more (only) centred on their geostrategic domestic policies rather than taking Israel and Palestine into consideration.

In brief, in order to acknowledge the controversial features the EGALITARIAN SHARED SOVEREIGNTY advises to remove the borders and any checkpoints in the disputed territories.
As we discussed when assessing population in the context of the Israel-Palestine difference, by applying the EGALITARIAN SHARED SOVEREIGNTY, the inhabitants of the disputed territories would be citizens of both sovereign states, they would have a common passport (an Israeli/Palestinian passport) valid in the disputed territories.
In terms of religion, as the second pre-requisite recognizes basic non-political liberties, freedom of movement and residence would be adopted at a constitutional level. The lexically prior prerequisite of non-political liberties controls this.