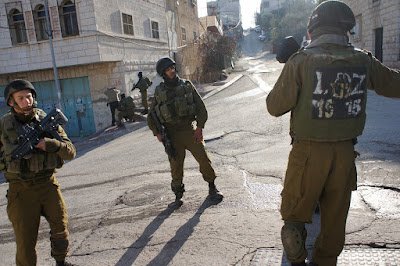 The Israel-Palestine difference and territory


The last post applied the EGALITARIAN SHARED SOVEREIGNTY to the Israel-Palestine difference and their people. Today we center on territory.

Territory, in principle, can be defined as an area owned and possessed by the population (in land, water, space and, perhaps, cyberspace). Like population, it may have features that could cause controversy in TERRITORIAL DISPUTE. Many sub-elements constitute a territory (for example, borders, natural resources, defense).

Several questions have to do with these sub-elements in the context of the Israel-Palestine difference. Among them: How may geographical borders between Israel and Palestine work? What about areas in which both Israel and Palestine have presence? Finally, in the hypothetical scenario that a party alien to the original dispute (for example, Iran) decided to invade the region, who would be in charge of the defense?


From our previous posts, we have learnt so far that some of the main concerns related to the Israel-Palestine difference are:

This is a constant matter of controversy. For the past few days, demonstrations along Gaza’s border have resulted in many fatal casualties. It is self-evident this is not an isolated fact but an ongoing issue. Israeli forces killed at least 60 people and injured more than 1,000 on Monday 14th May. The victims were demonstrators who had massed along its roughly 40-mile border with the Gaza Strip. Today’s picture illustrates a checkpoint (Gilbert Junction Checkpoint). For a list of checkpoints follow the link below:

National defense will be seen here as the protection of any interest a State has (e.g. possessions, territory, and population) through different means (e.g. military, economic, and diplomatic).


There are several States in which the army and navy are not big, well equipped or trained enough in order to defend their territory or population but they are still respected as States. There are others that in fact do not have military defense at all, their defense being the responsibility of another country or an international organization (e.g. OTAN).


There seems to be no problem with defense. The territory being defended is obviously desirable although the task is one which can be shared. However, what would happen if another party (for example, a sovereign State with no part in the conflict) decided to invade the disputed territories? In the hypothetical scenario a third party decided to invade the disputed territories, who would defend them?

The ways in which the situation may develop are as follows:


a) both Israel and Palestine may remain neutral; consequently the new agent would take over the territory if the inhabitants were unable to defend themselves;


b) one, either Israel or Palestine, may respond to the invasion and defend the territory;


c) both Israel and Palestine may respond to the invasion and defend jointly or independently the third territory.

In the case of the Israel-Palestine difference, any decision over this point has particular importance since it could affect in the future the legal and political status in Middle East.

NEXT POST: The egalitarian shared sovereignty applied to territory in relation to the Israel-Palestine difference