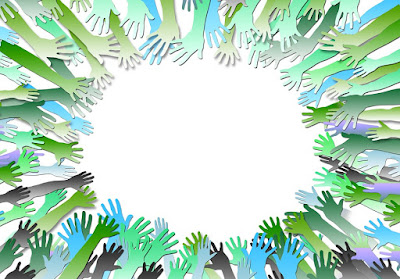 The Israel-Palestine difference and “What do we do with PEOPLE living in the disputed territories?”
In order to apply the EGALITARIAN SHARED SOVEREIGNTY to the Israel-Palestine difference, first we have to comprehend and clearly define what we mean by “people” in the context of this TERRITORIAL DISPUTE.
In other words: who may be part of “Israel” as a claiming party and who may be part of “Palestine” as a claiming party in the negotiations?

Often, research, the media and people at large refer to the Israel-Palestine difference as including Israelis and Palestinians. To an extent, the reference is correct. Yet, this statement is not accurate.

3.   Diaspora (Israel)
In the context of this blog series TERRITORIAL DISPUTES, diaspora means the Jewish people living in different parts of the world outside Israel, or the various places outside Israel in which they live (definition based on the Cambridge dictionary).

4.   Refugees (Palestine)
In the context of this blog series TERRITORIAL DISPUTES, refugee means a person who has escaped from their own country for political, religious, or economic reasons or because of a war (definition based on the Cambridge dictionary).

“The projected number of Palestinians living in State of Palestine at the end of 2015 is 4.75 million: around 2.90 million reside in the West Bank and 1.85 million in Gaza Strip. Palestinian refugees make up 42.8% of the Palestinian population in Palestine: 27.1% of them in the West Bank and 67.3% in Gaza Strip. Palestine is facing a rapid population growth and large youthful population with 69% below the age of 29. The population growth rate stands high at 2.8% and it is expected to remain stable due to decline in mortality rates while fertility rate remains one of the highest in the Arab region standing at 4.06, with high disparity between Gaza and West Bank, 4.5 and 3.6 respectively.  Furthermore, the current population density is a serious concern in Gaza Strip reaching more than 4500 inhabitants per one square kilometer.”

5.   Settlers in contested lands
“We define settlement as political action involving the organized movement of a population belonging to one national group into a territory in order to create a permanent presence and influence patterns of sovereignty in the settled territory.”

“Simply stated, in the modern era of nationalism, settlers and settlements have served as mechanisms of control and territorial expansion over disputed territories.”

“What has always been important for shaping the patterns of sovereignty is for the settler population to be identified as belonging to the racial, ethnic, or national community to which the sending state belongs, thus boosting the prospect of settler loyalty to the settlement project. THE PURPOSE OF SETTLERS, THEREFORE, HAS TYPICALLY BEEN TO PERFORM THE FUNCTION… “RIGHT-PEOPLING” THE TERRITORY.” (my capitalization).

“Jewish Israeli settlers in the West Bank constitute one of multiple actors with competing visions and priorities. Interestingly, the lack of unified vision and consistent policy has not prevented the settlement endeavor from growing.”

“This case is thus an example where conflict over contested territories cannot be fully understood in terms of relations between a sending state and an indigenous population. Rather, settlers configure a third consequential actor within the relationship.”

NEXT POST: The Israel-Palestine difference and the egalitarian shared sovereignty applied to people