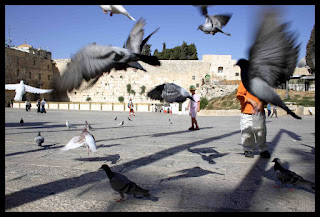 A TERRITORIAL DISPUTE, in simple terms, is a disagreement about “who owns a territory.” Yet, a TERRITORIAL DISPUTE is not that simple. In international relations, this means in principle there is a disagreement between at least two parties in relation to whom the sovereign is over a piece of land. The Israel-Palestine difference includes Israel, Palestine, the region and, to an extent, many other people around the world. The previous posts introduced a brief historical chronology, mentioned some key domestic and international reasons behind this case, and included references to other regional and international agents that have played (and in some cases, still do) a central role.


With the previous cases covered by this series (Kashmir, the Falkland/Malvinas islands, and Gibraltar) we explored an ideal solution called EGALITARIAN SHARED SOVEREIGNTY in what has to do with population, territory, government and law. The Israel-Palestine difference did not follow that approach. Why? Because before going into any negotiations we must determine who may be a legitimate party. That is the issue that maintains the Israel-Palestine difference in a status quo. The claiming parties do not recognise reciprocally complete legitimacy to go into any negotiations about the disputed territories. Therein, the last posts introduced the concept of “colourable claim” and explored three different grounds: historical entitlement, legal basis and moral standing. For one reason or another, both Israelis and Palestinians have grounds to introduce a claim (this is different from saying they have the right to be sovereign over these territories). It only means both Israelis and Palestinians ought to be part of any negotiation concerning the sovereignty (de jure and de facto) over the disputes territories.


The reader may ask why Israelis and Palestinian representatives do not agree on a common ground to start negotiations and settle peacefully and permanently the Israel-Palestine difference. To give an answer I quote Huth once again below. The quotation clearly illustrates that international and regional issues at stake are many times dependent on domestic agendas (and viceversa). In a nutshell, the difference still exists because there is no real will to solve it.


“[…] very often political leaders are not willing to take risks and undertake diplomatic initiatives that will break a long-standing stalemate in negotiations. Furthermore, leaders themselves are socialized into viewing the target as an adversary and, as a result, they are not predisposed to view concessions as a legitimate option. Furthermore, […] a history of military conflict with the target can be used by the military to justify larger budgets […]. The combined effect, then, is that the idea of offering concessions and proposing a unilateral initiative to break the stalemate is a policy option quite difficult to get on the policy agenda of political leaders within the challenger. Few voices are advocating such policies within the challenger, and the prevailing climate of opinion (both mass and elite) is opposed to such a change in policy.”


“[…] leaders were typically constrained by domestic political forces to be very cautious in moving toward a compromise settlement, since popular and elite opinion, and often the military, was opposed to such a policy. [...] In most situations the leader’s position of domestic power and authority was better served by continuing confrontation […]”

There is another option: to think about how to solve this dispute. This series TERRITORIAL DISPUTES intends to offer a platform for discussion.


With all this in mind, I introduced the overall idea I call EGALITARIAN SHARED SOVEREIGNTY. I develop this approach in full in Núñez, Jorge Emilio. 2017. “Sovereignty Conflicts and International Law and Politics: A Distributive Justice Issue.” London and New York: Routledge, Taylor and Francis Group. Briefly, all parties share sovereignty in equal ideal terms. To get to that, these parties go into negotiations themselves (not UN or any other party alien to the conflict). If it is of interest to the reader, we can explore the Israel-Palestine difference through the lens of the EGALITARIAN SHARED SOVEREIGNTY and see how cooperation between Israel and Palestine can result in a peaceful and permanent settlement materialised by joint institutions. This series is always open to comments and suggestions.

Next post will introduce another TERRITORIAL DISPUTE. In the meantime, links to some informative sites and the previous posts below.


For an interactive map of TERRITORIAL DISPUTES see

For current information about TERRITORIAL DISPUTES see CIA’s The World Factbook at:

Previous posts of the TERRITORIAL DISPUTE series (only about the Israel-Palestine difference below):