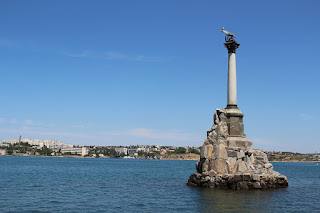 A “recent” TERRITORIAL DISPUTE is the case of Crimea. “Crimea is Russian” some argue (Burke-White 2014). “[T]he United States and its European allies share most of the responsibility for the crisis”, others maintain (Mearsheimer 2014). Yet some go even further and announce apocalyptically a new Cold War (Roskin 2014).
Leaving aside these and other opinions, the fact is that in early 2014 Crimea became the centre of a crisis with Russia and Ukraine as leading actors in the conflict. President Yanukovych was driven from power, Russia seized control of Crimea, and a referendum followed. Ukraine and most of the Western world considered the measures invalid (Barry 2014).
In addition to the Crimean “local” crisis in which we may recognise three agents, that is Crimea, Ukraine, and Russia, it is also a reality that this dispute has larger repercussions geographically, politically, and culturally speaking not only for the region but potentially with regards to the globe (Molchanov 2004).
While it is true that there is a crisis in the Crimean Peninsula, and tension is evident between Russia and Ukraine, there is also a fair share of rhetorical argumentation adding unnecessary considerations within legal and political sciences that do not seem to offer any tangible way out. The following posts will cover different views from people at large, politicians and academics in several disciplines such as law, political science, and international relations. We finish this post by including a very succinct background account, a couple of questions to the reader and sources.


·       Crimea lies on a peninsula stretching out from the south of Ukraine between the Black Sea and the Sea of Azov. It is separated from Russia to the east by the narrow Kerch Strait.


·       For centuries under Greek and Roman influence, Crimea became the center of a Tatar Khanate in 1443, which later became an Ottoman vassal state.


·       Rival imperial ambitions in the mid-19th century led to the Crimean War (1853-56) when Britain and France, suspicious of Russian ambitions in the Balkans as the Ottoman Empire declined sent troops.


·       Given autonomous republic status within Russia after the Bolshevik revolution, Crimea was occupied by the Nazis in the early 1940s.


·       Crimea remained part of Russia until 1954 when it was transferred to Ukraine under the then Soviet leader Nikita Khrushchev.


·       Russia’s President Vladimir Putin signed the treaty on the ‘Restitution of Crimea and Sevastopol inside the Russian Federation’ on 18 March 2014, Russia became the first state in continental Europe to have annexed part of another state’s territory since the 1940s.


To the reader, following two of our previous posts of this series about TERRITORIAL DISPUTES:

For reference to these questions see:

NOTE: This post is based on Núñez, Jorge Emilio. 2017. A Solution to the Crimean Crisis: Egalitarian Shared Sovereignty Applied to Russia, Ukraine and Crimea. Europe-Asia Studies.


Link to abstract and article


Barry, M. (2014) ‘The Loss of Crimea, How Much Does Ukraine Lose, and How Much Does Russia Gain, a Computable General Equilibrium Model’, Journal of Global Peace and Conflict, 2.


History of the Republic of Crimea, Ukraine (Valdosta State University)