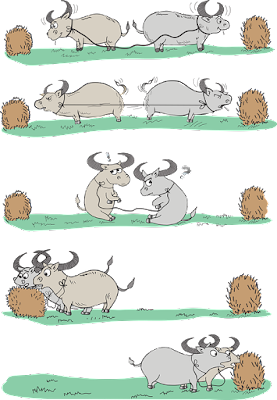 Crimea, negotiations and a proviso
The previous post referred to the arrangements that Crimea, Russia and Ukraine could have in place in order to achieve a peaceful and permanent solution: the egalitarian shared sovereignty. However, the post finished with a remedy that still needed some guarantees to secure it cannot be used as a subterfuge for domination or imposition by the strongest party.
The egalitarian shared sovereignty includes a proviso
If we added a proviso in order to make sure that the party with greater ability and therefore greater initial participation rights would have the obligation to bring the other two parties towards equilibrium, the proposal becomes reasonable.
That is because it ensures the most efficient current distribution of rights and obligations but also ensures the party that currently benefits most has an obligation to bring the other two parties up to a position where they can contribute equally, that is, it has the burden to assist the other two parties to acquire the ability to contribute equally to that particular objective/area/activity of sovereignty over the third territory.
Therein, the party with the greater ability in whatever area would agree to this because there is no other way of having the cooperation of the other two, and the other two parties would agree because this arrangement requires they receive something immediately and will eventually gain the ability to have an equal share, and they would otherwise get nothing.
It is true that the obligation is potentially onerous:
The way in which the parties fulfil the final agreement or how the parties use the outcomes of the exploitation of their shares have to do with either practical matters that depend on each real scenario or with decisions pertaining internal sovereignty and therefore are out of the scope of this article. Similarly, to think of every possible factual difference amongst the parties such as geographical proximity would be out of the scope of an academic writing of similar nature, in particular when this is only a theoretical exercise.
In what matters the justification for the obligation owed by the more advantaged claimant, two clarifications must be made.
That is because anything less than shares in equilibrium would potentially imply a smaller share in comparison to those of the other parties. Therein, the bigger the share, the riskier the case for any of the parties to have more control on a particular issue pertaining sovereignty or the sovereignty of the third territory as a whole.
This is directly linked to the idea of non-domination since the possible monopoly of power with regards to a particular issue pertaining sovereignty or the sovereignty of the third territory as a whole could degenerate into arbitrary power by the decisions being made mainly by the strongest party or in benefit only of the strongest party.
In consequence, the freedom of the least advantaged parties with regards the choices they could make with their shares and the originally agreed equal standing could potentially be reduced to the ‘rubber-stamping’ of the decisions made by the strongest claimant. Therein, it is reasonable to believe that the representatives of the parties would find the equilibrium proviso a fair solution to safeguard the interests of the three populations involved.
This way of approaching sovereignty conflicts like the ones discussed in this blog I call egalitarian shared sovereignty.
NOTE: This post is based on Jorge Emilio Núñez, Territorial Disputes and State Sovereignty. International Law and Politics (Routledge 2020).
Previous published research monograph about territorial disputes and sovereignty by the author, Jorge Emilio Núñez, Sovereignty Conflicts and International Law and Politics: A Distributive Justice Issue London and New York: Routledge, Taylor and Francis Group, 2017.
NEXT POST: Crimea, negotiations and “similar” or “identical” shares of sovereignty
Tuesday 10th March 2020
Dr Jorge Emilio Núñez
Twitter: @London1701
https://drjorge.world