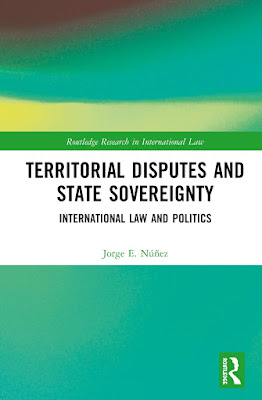 This book is one of several steps in order to assess and potentially find viable ways to solve territorial disputes. The first step, Núñez 2017[1], presented sovereignty conflicts as a matter of ideal theory and, therefore, did not consider real implications in territorial disputes. These pages aimed to continue the path by exploring some factual and logical, ideal and non-ideal features in ongoing territorial disputes around the world.[2] This time, together with conceptual elements, many current territorial disputes were introduced to compare and contrast some differences and find some common, arguably constant, features. Therein, whilst the monograph offers an understanding of the dynamics of territorial disputes, it also helps contribute to international law and politics by developing a more integrated approach to theory building.

These chapters had two simple yet fundamental premises. First, a comprehensive and more robust understanding of international conflict requires a global and inter-disciplinary assessment. Secondly, integrated and useful theories of international law and politics must agree on a common set of key conceptual elements for the evaluation of territorial disputes if they aim to integrate their findings in order to explore potential permanent and peaceful means to settle them.

Chapter 1 introduced the core conceptual and methodological elements and the overall structure. Some constant features in all territorial disputes were highlighted: ongoing and pervasive nature of territorial disputes and sovereignty conflicts, their multi-layered nature and the lack of common scientific ground to assess them and, therefore, to solve them. Chapter 2 examined the concept of “state.” By introducing its basic components—i.e. population, territory, government (or government and law—and a sample of theories in legal and political sciences that refer to the state it resulted more evident that different theories and bodies of literature refer to the same concept but give preeminence to one or some of its elements in their analysis. Therein, despite these theories and bodies of literature refer to the same concept—i.e. state-and the same elements—i.e. population, territory and government (or government and law) —legal and political sciences offer different conceptions based on the element (or sub-element) of analysis. Therein, disagreements are apparent and not intrinsic to the concept of state itself but to the views related to the concept (or real phenomena behind this concept). These views are based on hermeneutical and evaluative elements than can easily be agreed between different disciplines in order to have conceptual or substantive results (or both) that can further the study of the state. In turn, chapter 3, introduced the concepts of sovereignty and self-determination. The purpose of the assessment was to demonstrate that sovereignty and self-determination are inclusive and that by shifting the focus from territory to people territorial disputes might find a solution. If the assessment of territorial disputes can center on elements other than territory, sovereignty can be shared in a way in which is beneficial to all the claiming agents, and self-determination may lead to solutions different from secession, there is room for territorial disputes to be resolved by cooperative approaches.

Chapter 4 presented territorial disputes, different kinds of claims, issues at stake and the different contexts at play—i.e. domestic, regional and international. Indeed, territorial disputes are multi-faceted and multi-level. Therefore, to leave aside elements on their evaluation is to risk a partial understanding of a complex situation. To be more precise, the challenger and the challenged agents in a territorial dispute may use any kind of claim—i.e. colorable claim—that may be the same, but not necessarily, for their initiation, continuation and escalation into conflict or a peaceful and permanent settlement.  In addition to this, the same ground for any claim may be valued differently. Consequently, a comprehensive and more appropriate evaluation of territorial disputes should accept a variety of issues at stake and should include the domestic, regional as well as international contexts.

Currently, there are many remedies to settle permanently and peacefully territorial disputes. Chapter 5 presented rules and methods such as negotiation, mediation, inquiry, conciliation, arbitration and regional and international institutions and organizations such as the United Nations, the International Court of Justice, the Organization of American States, the Arab League, only to name a few. Despite the myriad of procedures and institutions, parties in a dispute do not use them or seek their assistance to solve their differences. Consequently, this chapter introduced a set of pre-requisites that should be taken into account before any procedure for dispute settlement is chosen. Thereafter, the final paragraphs included the egalitarian shared sovereignty as a way to deal with the multi-level and multi-faceted quality of these disputes that, at least in theory, no reasonable party may reject.

Chapters 6, 7 and 8 included references to a sample of ongoing territorial disputes around the world. Chapter 6, with the Americas, introduced the common roots in all cases: the historical component based on colonial times. Thereafter, three main thematic areas and some controversial examples in each occasion were reviewed: the cases that included a participant in the dispute outside the American continent; the neo-colonial interference of the United States in other states; and the ongoing territorial disputes between states in the region. Some partial conclusions indicate that any population in a disputed territory, whether implanted for “right-peopling” reasons or indigenous, may pose a different interest to the ones represented by the claimant sovereign states. Chapter 7, with Europe and Asia, focused the analysis on two main facets. With the European cases, the emphasis was given to the sociological components whilst the Asian selected examples highlighted the interconnections the domestic, regional and international contexts have. Also, this chapter shifted from the ideal view of a unique “state plan of life” to the acknowledgment that real case scenarios will include a variety of individual and collective interests that may have (but do not need to) different views about justice and the dispute itself. Finally, chapter 8, with territorial disputes in Africa and Middle East, brought all the aforementioned theoretical background briefly together. That is to say, all disputes include several issues at stake and the domestic, regional and international contexts have a degree of influence. Indeed, territorial disputes are multilayer and multi-contextual. Moreover, it highlighted the fact that people can be another instrument in feeding conflict through right-peopling of the territory.

These chapters show that it is in the comprehensive understanding as multilayer and multi-contextual nature of territorial disputes that a path towards a better explanation of their complexity can be built. For instance, civil societies may include internal divisions based on history, ethnicity, religion, etc. that can have an impact in the way these different groups perceive the dispute and their role as a political community in them. Secondly, governments and leaders may opt to keep the difference in a political and legal status quo because of the higher pay-off to their prestige and power (rather than a definitive and peaceful solution). Furthermore, together with local and regional actors, there are other international agents (not necessarily regional ones) that have a direct interest in these areas and, consequently, the way in which the dispute develops depending on their own interests and their alliances with any of the original local and regional claimants.

It should be evident by now that these claims, issues at stake and contexts work together in negative synergy resulting in the origin and continuation of territorial disputes and their potential escalation into conflict. Ergo, these disputes have to be comprehended in light of their complexity. That is to say, any study should firstly, acknowledge the different claims by the different claiming parties, the different evaluation of these claims by each of these parties and the fact that each claiming party will present different subgroups, interests and views within. Secondly, it should accept their complex nature because of the several issues at stake. Finally, it should contextualize the dispute locally, regionally and internationally for a more accurate comprehension. Therein, by gaining a better, more robust, exhaustive and accurate understanding of their intricacy, it may be possible to reimagine in theory, and hopefully, in reality, a way towards solving them peacefully and permanently.

[1] Jorge E. Núñez, Sovereignty Conflicts and International Law and Politics: A Distributive Justice Issue. London and New York: Routledge, Taylor and Francis Group, 2017.
[2] For the difference in law between empirical and logical issues and in in political science between ideal and non-ideal theory see chapter 8, fn. 3.
Posted by Dr Jorge Emilio Núñez at 01:37