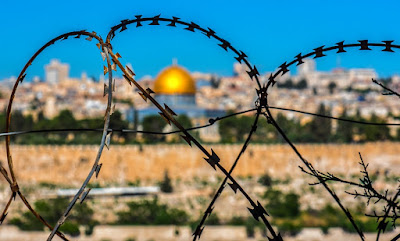 Today, the post includes several interesting articles and studies that offer a variety of views about the same difference.

Last but not least, I include a link to a final article that presents the US views about the dispute by examining presidential speeches from Clinton to Obama.

“Israelis and Palestinians both claim Jerusalem as their capital. The State of Israel has proclaimed Jerusalem to be the “undivided, eternal capital of Israel” and maintains its primary governmental institutions there. The Palestine Liberation Organisation (PLO) ultimately foresees the eastern part of the city as the capital of the State of Palestine. The international community has accepted the de facto application of Israeli law in West Jerusalem while the claim to internationalise Jerusalem is not seriously raised anymore.”

History and politics of Jerusalem (link to complete article)

“We write this editorial as Israel celebrates, and the rest of the world condemns, Donald Trump’s declaration of U.S. recognition of Jerusalem as the capital of Israel. It is pertinent to recall on this issue Arthur Koestler’s famous quip, made a century ago in reference to the Balfour Declaration, that “one nation solemnly promised to a second nation the country of a third.”

“Two unintended consequences emerge from the new U.S. position: first, it brings the status of Jerusalem back to the limelight, after it was pushed to the back burner by the Syrian and Yemeni wars; and second, it has clearly placed the United States outside of the international consensus with regard to any future peace process over the status of the city, or indeed within the Arab-Israeli conflict. This has opened the door to other global and regional actors, particularly Europe, Russia, and Turkey, as future mediators.”

“Underlying the objections of the majority of countries, including the United States until recently (that is, until Trump’s election), to Israeli control of Jerusalem has been UN General Assembly resolution 181, which affirmed the partition plan for Palestine and the creation of an international zone in Jerusalem known as the corpus separatum. That notion established in the city a special international regime in which both Palestinians and Israelis would have a dual national identity in the city. Given the slow death of the peace process and the de facto withdrawal of the United States from a mediating role, is it time – seventy years later – to revive this plan for Jerusalem?”

“The oficial position of the PLO toward Israel has continued to be insistence on the replacement of the state of Israel with a multiracial secular state.”

“In sum, the positions of the parties on the Israelis have not significantly altered the status of question of sovereignty, over Jerusalem are irreconcilable. Without dramatic and fundamental form political changes in Israel, the Arab states, or both, any compromise on Jerusalem appears unlikely.”

Jerusalem: Some Aspects of a Complex Problem (link to complete article)

“States recognizing Israel have not recognized Israeli sovereignty over either the western or eastern sector of Jerusalem, despite nearly half a century of Israeli control in West Jerusalem, and nearly thirty years in East Jerusalem.”

“Regarding West Jerusalem, states maintaining diplomatic relations with Israel have avoided locating their embassies there, placing them instead in Tel Aviv, precisely because they consider the status of Jerusalem to be undetermined. As for East Jerusalem, objection to Israel's control is exhibited through collective criticism of Israel at the United Nations.”

“To assert its legitimacy in Palestine, Israel relies primarily on the 1947 General Assembly resolution, but this resolution yields no argument for sovereignty in Jerusalem,75 since the resolution proposed internationalization.”

“From the standpoint of territorial right, as this notion is understood in international law, Palestine has a valid claim to Jerusalem. That does not mean that it could not agree to a solution whereby the City would be internationalized, or whereby it would be divided or controlled jointly. Jerusalem is one issue among several to be resolved between Palestine and Israel, and the parties are free to make concessions on one issue in order to gain an advantage on another.”

“Despite the many proposals for negotiating the Jerusalem issue, any agreed plan for resolving the future status of the Holy City has defied generations of negotiators.
Israel’s formal position proved paradoxical. While the Oslo Agreements in September 1993 made Jerusalem one of the subjects for the permanent status negotiations between Israel and the Palestinians, Prime Minister Yitzhak Rabin made clear in his final Knesset address in October 1995 that Jerusalem was to remain united under Israeli sovereignty. But by formalizing past understandings with the Hashemite Kingdom of Jordan over its role in the administration of the Muslim holy sites, through instruments like the Washington Declaration, he appeared to be drawing a distinction between sovereignty over Jerusalem, which in his view had to be retained by Israel, and an international administrative role for the holy sites, which he was prepared to explore with Israel’s eastern neighbor.
Thus, while insisting on Israeli sovereignty over a united Jerusalem, he did not view the issue of Jerusalem as a “zero sum game.”

Final article for the reader (ref. presidential speeches from Clinton to Obama)
Jerusalem in the Courts and on the Ground (University of Missouri) [link to complete article]