BOOK PREVIEW [coming May 2017] Sovereignty Conflicts and International Law and Politics: A Distributive Justice Issue. Chapter Six: How can shared sovereignty be just? 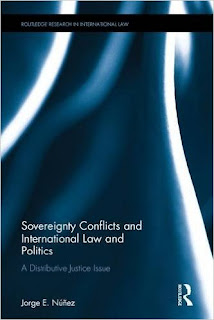 How can shared sovereignty be just?

The aim now is to present a conception of shared sovereignty that
can lead to an abstract model in which the claimants in a
sovereignty conflict leave aside reasons that may work against a
final and peaceful solution. This Chapter will explore if it is
possible to adapt the model created by John Rawls in his Theory
of Justice to sovereignty conflicts. The idea is to present an
argument for hypothetical agreement by coming up with
principles that cannot be reasonably refused. Therefore, this is a
theoretical exercise to focus on what factors cause bias in
sovereignty disputes. Then, the task is to design a procedure
which will limit the effect of these factors. As well as highlighting
these pitfalls on the way to a peaceful solution, a hypothetical
agreement amongst the claimants will be explored. If such an
agreement is reached, it must be one that people could not r
easonably reject later on, and so to do this bias must be eliminated.

As in Theory of Justice the analysis conducted here is based on a
hypothetical situation. In consequence, the only thing needed is
that all three parties are motivated to obtain a reasonable solution.
Therefore, it is assumed that they have appointed free and equal
negotiators to achieve this. Hence, this original position in which the
negotiations take place assumes certain other features that will be
discussed here. Within this environment, the negotiators will examine
a series of principles and see if any of them secures their respective
ends as representatives of the claimant populations—the two
sovereign States and of the third territory.

Indeed, Rawls’ thinking on international justice can be found in The
Law of Peoples. Some of its elements will be explored too. Yet, it
is mainly his Theory of Justice and the method he develops there that
will be used here. The main reason to proceed this way is that Rawls
makes clear in The Law of Peoples that it is ‘peoples’ that constitute the
relevant moral units of international society leaving aside States per se.
In addition to this, he emphasises that sovereignty is not central for
his proposal. This monograph, on the contrary, follows the traditional
view that States are constituted by a population (‘peoples’) but also
recognises other constitutive elements. That is because this
monograph is centred on sovereignty disputes, issues that Rawls himself
does not address.

In other words, Rawls was involved in a different project in The Law of
Peoples. This book does not argue that the solution is the one Rawls
would necessarily come up with or what Rawls would have wanted.
It is using his methodology to arrive at its own solution.