To follow up, the Juris North Group invites you to attend to the discussion on: 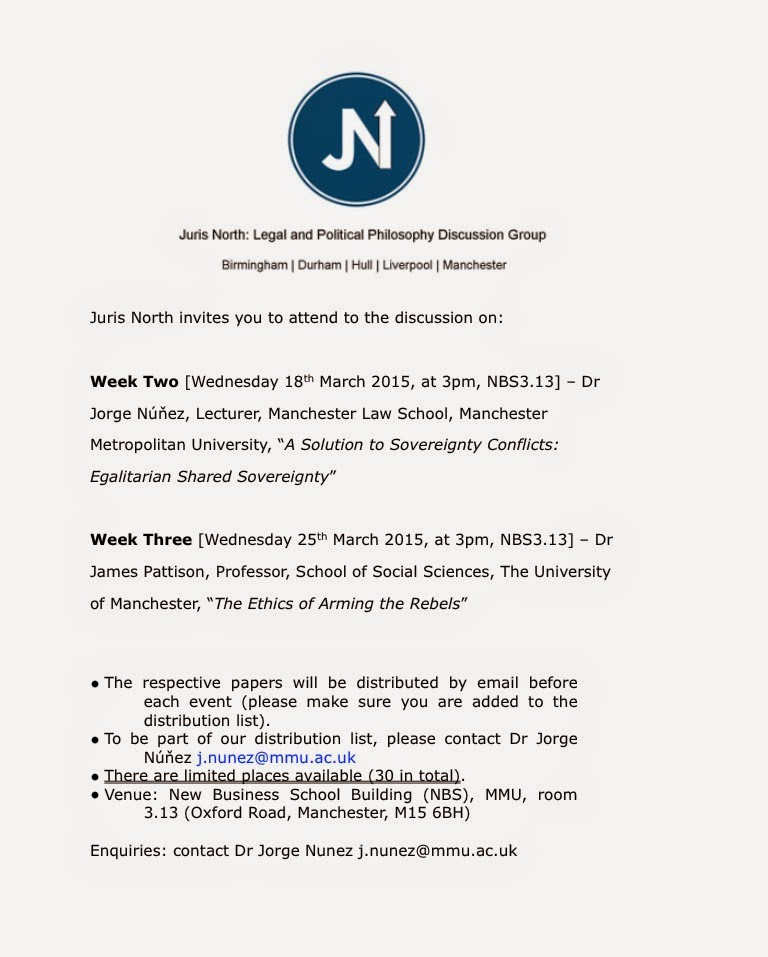 Please find complete details following the link below. RSVP
Event link
An abstract of the article to be discussed next week can be found below for your perusal. See you all on Wednesday!

A Solution to Sovereignty Conflicts: the Egalitarian Shared Sovereignty
by Jorge Emilio Núñez

“Crimea is Russia’s” some argue. “[…] [T]he United States and its European allies share most of the responsibility for the crisis” others maintain. Yet some go even further and announce apocalyptically a new Cold War. Leaving aside these and other opinions, the fact is that in early 2014 Crimea became the centre of a crisis with Russia and Ukraine as leading actors in the conflict. President Yanukovych was driven from power, Russia seized control of Crimea, and a referendum followed. Ukraine and most of the Western world considered the measures invalid. In addition to the Crimean “local” crisis in which we may recognise three agents−i.e. Crimea, Ukraine, and Russia−it is also a reality that this dispute has larger repercussions geographically, politically, and culturally speaking not only for the region but potentially with regards the globe.
While it is true that there is a crisis in the Crimean peninsula, and tension is evident between Russia and Ukraine, there is also a fair share of rhetorical argumentation adding unnecessary considerations within legal and political sciences that do not seem to offer any tangible way out. Given that the Crimean crisis is but one of many other sovereignty conflicts currently existent around the world, why not thinking of this particular dispute as an example towards peaceful multilateral understanding through dialogue and negotiations?

We are used to seeing and accepting as fact that in one territory there is one population governed by an ultimate authority, with a common legal bond or system of norms. What would happen if that one territory and population had two ultimate and hierarchically equal sovereigns (legally speaking) and, at the same time, two valid sets of norms? Would it be possible, for instance, that Israel and Palestine had sovereign authority at the same time over Jerusalem? Would it be possible that Argentina and the United Kingdom were at one time sovereign over the territory and population of the Falkland/Malvinas Islands? What about Russia and Ukraine having the same degree of sovereign power over Crimea? If the answer was positive, what would the consequences be—in terms of territory, population, government and law?
There are many cases that can be characterised as sovereignty conflicts in which international agents (namely, two sovereign States and the population of the third territory under dispute) claim sovereign rights for different reasons over the same piece of land. Crimea is but one amongst many other sovereignty disputes around the globe.  Besides, these conflicts have a particular feature: their solution seems to require a mutually exclusive relation amongst the agents because it is thought that the sovereignty over the third territory can be granted to only one of them. Indeed, sovereignty is often regarded as an absolute concept—i.e. exclusive, and not shareable.
In light of this obsession with absolute, and rejection of shared sovereignty, long-standing disputes still continue to be presented around the world as a zero sum game, with many negative outcomes of different sorts (e.g. social struggle, bad governance, inefficient exploitation of natural resources, tension in international relations, and threat to local and international peace). Thus, while these conflicts are in principle confined to specific areas and start with negative consequences primarily for the local population, they tend quickly to expand to the regional and—even—the international level (e.g. effects on international price of oil, arms trafficking, terrorism, war).
International relations and legal and political scholarly literature offer various potential remedies that one could use to solve the problem. These include independence, self-determination and free association—to name a few. Although these remedies are useful in certain conflicts, they are futile in several others. Hence, these conflicts remain unresolved and in a legal and political limbo.
The challenge is to present the agents with a solution that can acknowledge their individual claims without disregarding those of their competing parties. However desirable, such a solution may seem Utopian.  I propose to see these conflicts from a different yet broad perspective rather than as conflicts between separate and independent rights. Therefore, I view the problem as a distributive justice issue following the work of Rawls. That is because distributive justice principles are a particularly appropriate tool to address sovereignty issues, just as they have previously been applied in assigning rights and obligations in other social institutions. As a consequence, reviewing different theories (e.g. ‘first come, first served’; just acquisition; the principle of equality) may help us to resolve the problem. This article aims to explore if a solution that certainly is desirable can also be possible and may offer a peaceful way of solving sovereignty conflicts through the use of principles of distributive justice.
In the following sections I will leave aside the particular features of the Crimean crisis and embark on a theoretical exercise. The main reason to proceed in this manner is to eliminate any possible bias that otherwise may interfere with a peaceful solution.