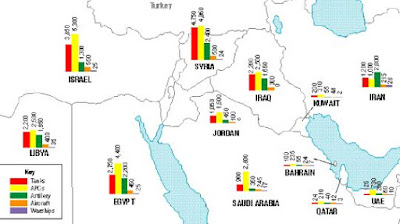 The Persian Gulf and the Military Balance

The latest posts on this series about TERRITORIAL DISPUTES centered the attention on the Persian Gulf. The last two posts introduced the EGALITARIAN SHARED SOVEREIGNTY and some key elements related to this particular issue.

Today’s post will cover defense:
What would happen if another party with no part in the original conflicts decided to invade or exploit natural resources in the Persian Gulf?
In the hypothetical scenario that an alien party to the area decided to invade the region or exploit natural resources, who would defend them? The ways in which the situation may develop are as follows:
a) the neighbor countries may remain neutral; consequently, the new agent would take over the islands, exploit natural resources in land and the continental shelf;
b) one of the sovereign states may respond to the invasion and defend the area;
c) some or all the neighbors may respond to the invasion and defend jointly or independently area.

At the same time, states have the right and are obliged to defend their own interests and their population. Consequently, any act of defense is fair and just as long as it is a result of an illegitimate threat or attack. However, in a TERRITORIAL DISPUTE, it seems difficult to determine the one who could/should be defending the territory in the event of an attack on what appears to be a common interest for all the involved parties: the areas under dispute.

In addition to the way in which the parties would defend the area,  there are two other crucial elements that need to be agreed, even if joint defense was the case:
a) the extent to which the burden can be made proportionate, with those with more of the appropriate resources taking the larger share (if they can be trusted not to turn their forces against the other two parties);
b) and the extent to which one considers what combination of contributions will be the most efficient, using, e.g., both the local knowledge of the people in the territory, and the equipment best adapted to defending it.
Indeed, if they take on sovereignty, they must take on the obligation to defend. However, how would Saudi Arabia, Iran, Kuwait, Iraq, Oman, Qatar, Bahrain, the United Arab Emirates share the defense?

The egalitarian shared sovereignty addresses the three elements that seem to be crucial in order to have shared defense: a) Resources; b) Training and opportunities; c) Safety of all the parties (how to avoid misuse of power).
What does it mean if the agents have different level of development? The differences in the case of defense are numerous—e.g. geostrategic location; economic resources; level of military development; training and facilities; number of troops; etc. A combination of contributions can make these differences work together in an efficient form.

The Persian Gulf presents a case with very different levels of defense power and development in terms of their respective defense systems (input-to-output ratio principle). Then, the egalitarian shared sovereignty can be fulfilled in two ways:
a) following the most efficient combination in terms of contribution (principle of efficiency)—e.g. using both the local knowledge of the people in the area, the geostrategic location, and the equipment, resources and any means best adapted to defending it;
b) the agent with the better comparative situation—in whatever aspect—may contribute in developing the other parties or granting them exclusive privileges (equilibrium proviso).

It is clear that the egalitarian shared sovereignty aims only to achieve the same level of opportunity and development for all the involved parties so they are able to defend the area (not the territory that is already part of the sovereign states).
Thus, even if there were variations in the future in terms of wealth status and defense development among the involved participants, the reciprocal obligation would always be the same for all the agents, i.e. to combine to produce the most efficient result.

Next time: natural resources and the Persian Gulf.