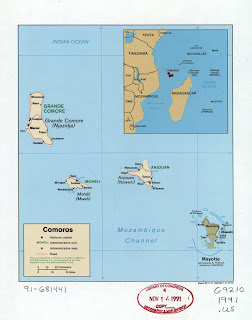 The posts will now introduce individual TERRITORIAL DISPUTES within Africa. The differences are divided into two categories:


Banc du Geyser
The Scattered Islands in the Indian Ocean (French: Îles Éparses or Îles Éparses de l'océan Indien) consist of four small coral islands, an atoll, and a reef in the Indian Ocean, and have constituted the 5th district of the French Southern and Antarctic Lands (TAAF) since February 2007. They have never had a permanent population. France and the Comoros view the Banc du Geyser as part of the Glorioso Islands.

France and the Comoros claim the Banc du Geyser as part of their exclusive economic zone (EEZ). The reef is also claimed by Madagascar. From the French point of view, it is part of the EEZ of Glorioso Islands, one of their scattered islands in the Indian Ocean. Madagascar announced its annexation in 1976.

In 2011, the Organization of Emerging African States (OEAS) published a Memorandum on the Admission of the United Micronations Multi-Oceanic Archipielago (UMMOA) in which the parties expressely considered the environmental importance and the disputed status of Banc du Geyser, Indian Ocean Island, which is claimed by France, Madagascar, the Comoros, and the UMMOA.

All of claiming parties, more than an ecological interest, seek economic gain that might come out of the soil exploitation, because there is talk of a possibility of nearby oil fields existence. The Union of the Comoros argues that it is located within the 200 miles of its exclusive economic zone (EEZ); while from the French point of view this reef is one of the Scattered Islands in the Indic Ocean belonging to the French Southern and Antarctic Lands district, which enlarges the French exclusive economic zone in the Indic Ocean.
Currently, there is no arbitration being done by any official organizations to settle the boundaries between the French ZEE, the Comoros Union or Madagascar in the region.

The World Factbook (pdf)
Link to the complete document

Scattered Islands in the Indian Ocean