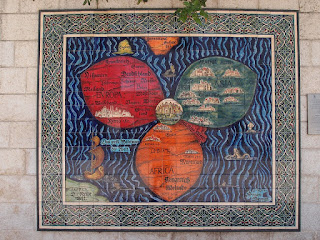 Our last post introduced the “colourable claim” in the context of TERRITORIAL DISPUTES. In particular, we aim to determine WHO should be included in case of peaceful negotiations to solve the Israel-Palestine dispute. In other words, WHO counts?


It is important to make clear that because a colourable claim recognises surface legitimacy to claim sovereignty, it does not need to be the case that the sovereign States or the population of the third territory have claims sufficiently equal in strength to give them roughly equal claims in respect of the third territory. The Israel-Palestine difference presents two main parties: Israel (sovereign de jure and de facto) and Palestine (sovereign de facto) and both argue about sovereignty de jure and de facto over the same territory (or part of the territory to be more precise).


It is indeed in the negotiations when the parties may discuss the weight of their claims. It is in the negotiations they will present evidence (facts, law, politics, finance, history, etc.) and discuss whether they agree or disagree with their counterpart and why.


Each particular ground for a colourable claim needs exploration. In broad terms, a colourable claim can be based on: 1) historical entitlements; 2) the legal status of these claims; and 3) moral considerations. NOTE that this list is not exhaustive and only includes some of the most common examples in sovereignty conflicts.


A colourable claim is based on historical entitlements when any of the claiming parties bases its right to claim on past facts related to the third territory and their intention to be its sovereign. These past facts can be related to actual occupation—for instance, effective occupation. But they do not exclude claiming parties that do not currently occupy the third territory. However, in the event they did not occupy the third territory, their continuous intention to do so would be enough to grant them a colourable claim. That is because they may have been removed or expelled from the third territory. The Israel-Palestine difference is a clear example of two parties continuously arguing about the sovereignty (de jure) over the same territory when in actual facts (sovereignty de facto) one of these populations lives there and the other one argues forced removal.


Effective current occupation or past occupation and continuous intention to occupy the territory, they may have a basis strong enough to have a reasonable chance of being sovereign of that third territory. In other words, the facts they use to support their right to claim sovereignty may be proven in the negotiations. It is the same kind of test used in British law to determine whether there is a possible cause to move forward—i.e. if there is a case to answer.

Tomorrow, the second ground for a colourable claim: legal status.